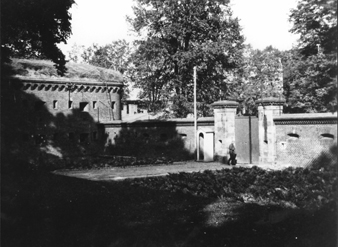 The late 19th century barracks at Torgau-Brückenkopf and the surrounding fortress compound served as a military prison during the Second World War. On 27 August 1939, immediately before the German invasion of Poland, the commandant of the Torgau Wehrmacht prison had the Brückenkopf compound cleared of its civilian occupants and converted to a prison. At the beginning of the Second World War Brückenkopf joined Fort Zinna as Torgau's second military prison. In the first months of the war, it was subordinate to the commandant of Fort Zinna. In autumn of 1939, it was then given the status of an independent Wehrmacht prison. After the former barracks had been remodelled and two huts erected as prisoners' quarters in November 1939, Torgau-Brückenkopf was ready to accommodate approximately 1,000 prisoners. As early as 8 January 1940 the prison was already 'full to capacity'. 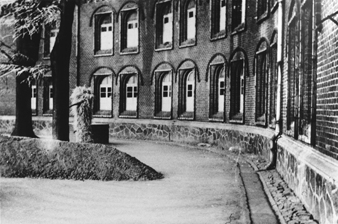 As in the Fort Zinna Wehrmacht prison, the inmates here were German military personnel who had been convicted by military courts of resisting conscription, insubordination, desertion or criminal offences. These prisoners were held under inhuman conditions. The inmates also included foreign prisoners of war and Wehrmacht personnel from the occupied European countries, some of whom had been conscripted into the German armed forces, and members of the German and European resistance.

Life as an inmate in Torgau's two Wehrmacht prisons typically included military drill and degrading treatment. Harassment and abuse such as drilling for hours, confinement, solitary confinement in the dark, corporal punishment and reduction of the already meagre rations characterised prison life.

The prison commandants ordered the evacuation of Fort Zinna and Brückenkopf shortly before the historic meeting of American and Soviet troops in Torgau. The inmates of Brückenkopf Wehrmacht prison had been evacuated as early as 14 April 1945. American troops finally liberated them on 8 May 1945 in the Saxon town of Markersdorf.