Home » Historical sites » Defeat and liberation - the meeting on the Elbe

Defeat and liberation - the meeting on the Elbe 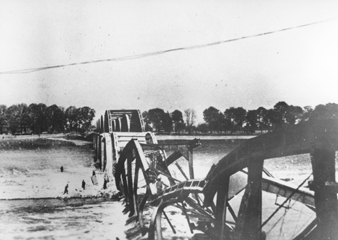 The first meetings of Soviet and American troops on the Elbe in the vicinity of Torgau in April 1945 brought the end of the Second World War in Europe within reach.

Elements of the US 69th Infantry Division had been on the Mulde River since 23 April 1945. Patrols were to conduct reconnaissance as far as the Elbe. The patrol commanded by Second Lieutenant William D. Robertson left Wurzen at about 10:00 hours on 25 April 1945. British prisoners of war in Sitzenroda reported that there were American POWs and wounded in Torgau. Robertson's patrol drove there, farther than their orders allowed. Near the Fort Zinna Wehrmacht prison they encountered a few prisoners. The prisoners reported that Soviet troops had already reached the east bank of the Elbe. Using water colours from a chemist's shop, Robertson turned a bed sheet into a US flag. Then he climbed up the tower of Hartenfels Castle and waved the flag from the attic window. Soviet soldiers of the 58th Guards Rifle Division at the opposite end of the bridge took notice and fired red flares. Green flares were the agreed answer signal but as the US patrol had none, the Soviets opened fire. The two patrols managed to communicate with the help of a Fort Zinna POW, a Soviet officer named Titov. Robertson and the others cautiously crawled across the ruins of the Elbe bridge, which the retreating German troops had blown up in the early morning hours of 25 April. Sergeant Nikolai Andreyev and other soldiers crawled towards them from the east side. They embraced without a word. They made their way back to the other side on all fours, where the Red Army soldiers gave them an enthusiastic welcome. Robertson negotiated with the Soviet commander to arrange a meeting of the two commanding officers. Accompanied by four Soviet soldiers, the patrol drove back to the American troops at about 17:00 hours.

No further fighting occurred in the town. With the meeting of Soviet and American troops on 25 April 1945, the war was over for Torgau.

An observation platform is all that remains of the old Elbe bridge. The new road bridge was opened in 1993. One year later the historic bridge was torn down.

The link-up monument immediately adjacent to the observation platform commemorates the meeting of the American and Soviet troops on 25 April 1945 in Torgau. It was built according to a design by Soviet architect Avraham Miletzki and dedicated in September 1945.