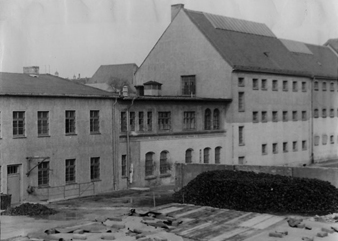 The former military jailhouse at Fischerdörfchen was built in 1911. Various sections were later to the building, and the complex was finally converted into a court jail. Between 1933 and 1945 the building also served as a pretrial confinement centre for the Gestapo and the National Socialist military judiciary.

Beginning in the summer of 1945, Soviet security services used this site for all-night interrogations and pretrial confinement.

From 1952 on, the East German Ministry of the Interior used the building as a penal institution for convicted juvenile offenders; its official designation was 'juvenile house'. Juveniles had been imprisoned here as early as 1948. As in the adult prison, life in the juvenile facility was characterised by overcrowding, poor hygiene and harassment by the prison guards. The strict military drill made no allowance for the inmates' young age. In 1963 the 'juvenile house' was moved from Fischerdörfchen to the penal institution at Fort Zinna. In 1975, the juvenile penal facility in Torgau was closed.