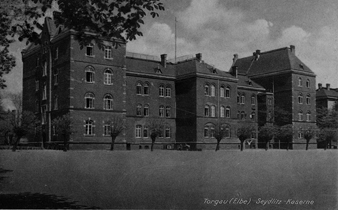 Seydlitz Barracks was used for quartering cavalry units from 1901 until the beginning of the Second World War. From 1944 on the head of the Wehrmacht POW administration, General von Graevenitz, had his office in the barracks. After the war the barracks complex served as a 'resettler camp' for housing ethnic German expellees from former German territories.

In later years the building complex was variously used by the Barracked People's Police (the predecessor of the National People's Army), as a police school and finally as quarters for the Soviet Army until the CIS troops withdrew from Germany in 1994. Today some of the former quarters have been converted to housing, whereas other buildings now contain the offices of the local labour office and other public authorities.