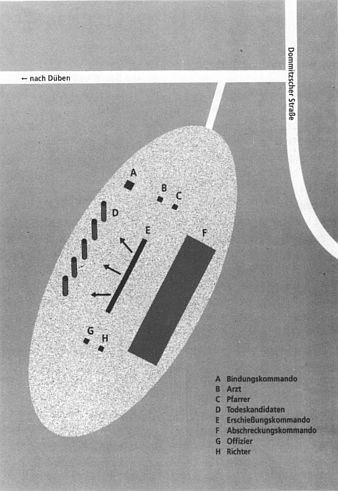 During the Second World War, convicted prisoners were executed by firing squads in a gravel pit not far from the Fort Zinna Wehrmacht prison. A second execution site was located in the north moat of Fort Zinna. The majority of prisoners executed were German military personnel who been sentenced to death by military courts for political and military offences and other violations of National Socialist criminal law. Acting in the interest of the National Socialist regime in Germany's war of aggression, the National Socialist military judiciary used the deterrent effect of its judgements to maintain discipline in the Wehrmacht. German military judges handed down more than 30,000 death sentences.

In August 1943 the Reich Military Court, National Socialist Germany's highest military court, moved its domicile from Berlin to Torgau's Zieten Barracks. From then on, its victims increasingly included resistance fighters from the occupied countries of Europe such as France, Belgium, the Netherlands and Poland. Religiously motivated conscientious objectors were also executed as were Germans and Austrians who deserted because of their political opposition to the regime. Citizens of Luxembourg and Alsace-Lorraine who resisted being drafted into the Wehrmacht were also executed as deserters in the gravel pit. Victims also included servicemen convicted of 'subversion of national defence' for remarks critical of the regime and those accused of homosexuality.

The executions took place in the early morning hours. The execution procedure followed formal regulations. Two hours before facing the firing squad, the condemned prisoner was informed that his death sentence would be carried out. An officer commanded the execution detail, and a military judge and chaplain were also present. The ten-man firing squads were recruited from troops stationed in Torgau. Usually they included guards from the Fort Zinna and Brückenkopf Wehrmacht prisons. Guards who volunteered for execution duty received benefits. A medical officer confirmed the death of the executed prisoner.

The total number of executions by firing squad in Torgau can no longer be exactly reconstructed. The records of the Wehrmacht, registry office and cemetery administration are incomplete but show that at least 197 convicted members of the Wehrmacht were executed by firing squad here. However, other sources support the assumption that the number of executed victims was actually much higher.

From 1943 on death sentences handed down by military courts were also carried out in the penitentiary in Halle on the Saale. On 17 September 1943 the first Wehrmacht prisoners from Torgau were executed in the Halle penitentiary. Records show that a total of 298 executions of prisoners sentenced to death by military courts had been carried out in Halle by 3 April 1945. The majority of the condemned prisoners came from the Wehrmacht prisons in Torgau.

The site of the former Süptitz gravel pit is now a park that was created in 1990.