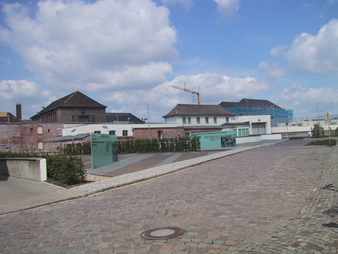 In 2007 a memorial was established in front of the Torgau Correctional Institution. It commemorates the victims of the National Socialist military judiciary, the Soviet secret police and the penal system of the SED regime who suffered unjustly in Torgau. A wooden cross erected in 1992 on the initiative of the organisation Vereinigung der Opfer des Stalinismus e.V. (Association of the Victims of Stalinism) was incorporated into the redesigned memorial.

Designed by Berthold Weidner (Stuttgart) and Martin Bennis (Berlin), the memorial commemorates different historical events at a single site but in two separate areas. This is done without in any way qualifying the events or offsetting them against each other. The two memorial areas are linked to each other by the use of natural stone paving and by corresponding memorial stones and informative plaques. At the same time, they are set apart from each other by the colour of stone, the texture and geometry of the paved surfaces and a hornbeam hedge. 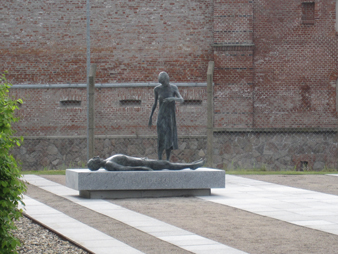 The memorial was officially opened on 9th may, 2010, adding a sculpture group by Thomas Jastram of Rostock. It is dedicated to the victims of the National Socialist military judiciary.