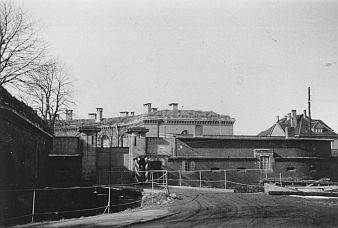 The outwork of Fort Zinna, built in 1810-1813 under the rule of Napoleon, was used as a military prison as early as the 19th century. In addition to prisoners of war, military prisoners and so-called work soldiers were held here. During the First World War captured officers were interned at Fort Zinna. After military jurisdiction was abolished under the Weimar constitution, the Prussian judiciary took over the Fort Zinna compound in 1920 as 'Torgau Prison'. In the first few months after the National Socialist takeover in 1933 political opponents were held here in 'protective custody'. Political prisoners remained in custody in Torgau until late 1935.

In April 1936 the prison was transferred from the Reich judiciary and placed under the authority of the Army High Command. In 1938 and 1939 Fort Zinna was expanded to become the largest Wehrmacht prison in the German Reich. After the Reich Military Court moved from Berlin to Torgau in August 1943, this highest Wehrmacht court held proceedings here as well.

Among those who suffered in the Wehrmacht prison Fort Zinna were not only conscientious objectors, insubordinate personnel, deserters and military personnel convicted of criminal offences but also members of the German and European resistance. Prisoners sentenced to death were executed by firing squad in the nearby gravel pit and the moat of Fort Zinna.

Fort Zinna was evacuated on 15 April 1945, shortly before the historic meeting of American and Soviet troops in Torgau. The sick inmates and Allied prisoners of war remaining in the prison were liberated by Allied troops on 25 April 1945.

From September 1945 on, Fort Zinna was used by the Soviet secret police as Special Camp No. 8. Over 8,000 Germans were imprisoned here. Pursuant to an NKVD order, they were kept totally isolated from the outside world on account of their actual or supposed membership or function in National Socialist organisations. Generally they were not charged with any specific crimes or violations of the law. There was never any intention of bringing them to trial. In March 1946 the camp was moved to the nearby Seydlitz Barracks, and in January 1947 it was closed.

Camp No. 10 served as a transit facility for thousands of German and Soviet citizens before being transported to 'corrective labour camps' of the GULAG system in the Soviet Union. These prisoners had been convicted by Soviet military tribunals. These military courts served as both an instrument for punishing National Socialist crimes and a means of implementing occupation policy. The Soviet prisoners were primarily punished for breaches of military discipline, 'treason' or criminal offences.

The prisoners in the special camps in Torgau also included persons who had been involved in National Socialist crimes. According to Soviet sources, a total of 800 to 850 persons died here.

In January 1950 the German People's Police took over Fort Zinna and converted it to an East German penal institution. The first prisoners were persons convicted by Soviet military tribunals. Active opponents of the policies of the Socialist Unity Party (SED) who had been convicted by East German courts were also imprisoned in Torgau in the 1950s and 1960s. Later the prison population primarily consisted of inmates convicted of criminal offences.

Today Fort Zinna is the site of a correctional institution of the Free State of Saxony.