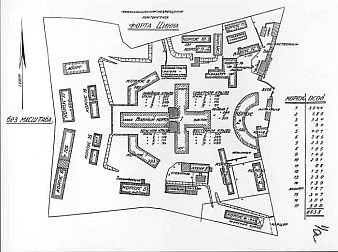 In August of 1945 the NKVD, the Soviet secret police, established Special Camp No. 8 at Fort Zinna. The camp was established pursuant to order No. 00315 issued on 18 April 1945 by NKVD director Beria. This order defined those 'hostile elements' which were to be 'held in confinement in internment camps' in the course of securing the rear of the front-line troops. These elements included members of the German intelligence agencies, 'spies' and 'saboteurs', members of underground groups, 'active members of the National Socialist party', 'leaders of fascist youth organisations', 'directors of administrative bodies' as well as 'newspaper and magazine editors and authors of anti-Soviet publications'.

The majority of the inmates held without a court conviction in Special Camp No. 8 were members of the NSDAP or other National Socialist organisations. Among the internees were also several hundred prisoners of war. The 'operative groups' of the NKVD and other Soviet security forces making arrests regarded mere membership in a National Socialist organisation or denunciation as sufficient grounds for internment. Specific charges were rare. The main task of the special camps according to the 'provisional camp regulations' of 27 July 1945 involved the 'complete isolation' of the internees. This meant no notification of the next of kin, not even in case of death, strict security measures and practically no work details outside the camp. Food rations and medical care were totally insufficient, with the result that nearly all deaths were attributable to emaciation or tuberculosis.

By late 1945 the prison population at Fort Zinna, designed to accommodate 1,000 prisoners, had swelled to 7,500. These prisoners were held in the cell block building and provisionally housed in hastily erected huts and in the casemates of the fortress. In March 1946 the camp was moved to the nearby Seydlitz Barracks. In January 1947 Special Camp No. 8 was closed and the prisoners were transferred to Special Camps No. 2 at Buchenwald and No. 1 at Mühlberg on the Elbe.

Fort Zinna remained in operation as Special Camp No. 10 from May 1946 to October 1948. It was unique among the system of special camps in the Soviet zone of occupation in that from the autumn of 1946 on, most of its inmates were Soviet citizens convicted by Soviet military tribunals. These prisoners had been selected for deportation to forced labour complexes in the USSR and were awaiting transport. Half of those deported to the USSR from the camps and prisons in the Soviet zone administered by the division of special camps were sent via Torgau. In proceedings that failed to meet any standards of the rule of law, the military tribunals convicted Soviet citizens of collaboration with the Germans ('treason'), 'absence without leave', desertion and criminal offences. Prisoners were sentenced to between five and 25 years in 'corrective labour camps' of the GULAG system.

Of the convicted German citizens held at Fort Zinna, persons who resisted Soviet postwar policies or simply seemed suspicious far outnumbered the actual war criminals and active supporters of National Socialism. According to Soviet sources, 800 to 850 persons died in the Torgau camps between 1945 and 1948.