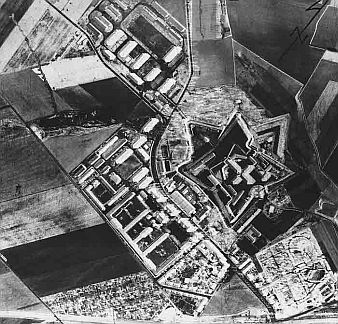 The handshake between American Second Lieutenant Bill Robertson and Soviet Sergeant Nikolai Andreyev on 25 April 1945 on the ruins of the Elbe bridge at Torgau not only came to symbolise the Allied victory over National Socialist Germany in the Second World War. Their meeting also signaled the end of Torgau's role as the hub of the Wehrmacht penal system.

In 1939 Torgau was the site of two of the eight prisons maintained by the Wehrmacht judiciary: Fort Zinna, which from 1936 to 1939 was expanded to become the Wehrmacht's largest and most modern prison facility, and the Brückenkopf prison. The inmates of these two Torgau prisons had been convicted by German military courts and were regarded as 'promoters of a seditious attitude'. They included conscientious objectors, insubordinate personnel, deserters, those charged with 'subversion of national defence', 'aiding the enemy' and 'espionage' as well as military personnel convicted of criminal offences. The prison inmates also included prisoners of war and members of the German and European resistance to the National Socialist regime as well as foreign nationals drafted into the Wehrmacht such as citizens of Luxembourg and Alsace-Lorraine.

Torgau assumed a pivotal role in the Wehrmacht penal system in March of 1941, when the Army High Command (OKH) designated the Fort Zinna prison as the screening centre for selecting convicts for 'probationary duty'. Torgau's special function as a screening and relocation centre was stepped up a year later, when the Armed Forces High Command (OKW) ordered the establishment of Field Penal Camps I and II in Torgau.

In August 1943 the Reich Military Court, the highest court of the Wehrmacht judicial system, moved its domicile to Torgau's Zieten Barracks as well. During the course of the war this highest Wehrmacht court alone handed down nearly 1,400 death sentences, of which approximately 1,200 were carried out, some in Torgau, some at other locations. Among the victims were conscientious objectors, especially Jehovah's Witnesses, members of the resistance organisation 'Red Orchestra', French and Polish resistance fighters, American prisoners of war and German generals.

The longer Germany's war of aggression dragged on and the more hopeless the struggle became, the more mercilessly the National Socialist military judiciary sought to combat sagging morale in the Wehrmacht and growing opposition. It convicted over one million German soldiers, 20,000 of whom were then executed. In comparison, the western Allies in the same time period executed a total of about 300 of their own troops sentenced to death by their military courts.

The total number of executions by firing squad in Torgau can no longer be exactly reconstructed. The records of the Wehrmacht, registry office and cemetery administration are incomplete but show that at least 197 convicted members of the Wehrmacht were executed by firing squad here. However, other sources support the assumption that the number of executed victims was actually much higher. Execution sites included the Süptitz gravel pit not far from the Reich Military Court and the north moat of the Fort Zinna Wehrmacht prison.

Only very few of the perpetrators were convicted after the war. Most of the judges on the Reich Military Court and other responsible military jurists survived the end of the war unscathed and continued their professional careers in the Federal Republic of Germany.